In a recent post on Black, White and Gray, Wheaton sociology professor Amy Reynolds asked “What Makes a Development Expert?” Pondering who should be the next president of the World Bank, and what approach he or she should take to development, Reynolds argued that the end of development is the human person–or human development. She further argued that the next president of the World Bank should not only be a “technical” expert, but someone who understands how culture influences development.

My students’ final assignment for the semester was to read Reynolds’s post and the links about the different candidates, and then use our assigned class readings from Amartya Sen, William Easterly, and Carruthers and Babb to vote for the new World Bank President. In my class, Nigeria’s Ngozi won 20 votes, Kim won 8, and Ocampo won 3. My students cited Ngozi’s technical expertise in economics and her experience as finance minster as her most important qualifications. Those who voted for Kim liked that he had proven results that a piecemeal approach to development–tackling one main issue (HIV/AIDS) through community-based centers–could work. 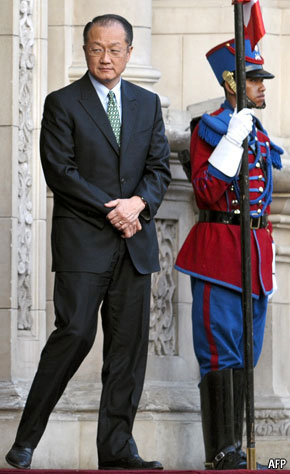 We know now that the American candidate, Jim Yong Kim, the former President of Dartmouth College,  co-founder of Partners In Health, and former director of World Health Organization’s Department of HIV/AIDS, was elected President of the World Bank. The Economist mused whether Kim, whose approach to development has been grassroots, can bring effective change to an agency most known for its big-push approach to development.

I have  a great interest in varying approaches to economic development. After graduating from Yale in 1995, I worked for three years at the Arias Foundation for Peace and Human Progress in San Jose, Costa Rica, founded by Nobel Peace laureate and two-time President of Costa Rica Oscar Arias. During my time there, I traveled throughout Central America and visited communities of former soldiers and guerillas in Nicaragua, El Salvador and Guatemala. I went to graduate school at Princeton to study international development from a sociological perspective.  Although my interests took a different route, I still follow debates in economic development. The more I read, the more I realize that development does not just mean expanding markets,  generating greater macro-economic growth, or increasing personal incomes, but rather development requires both economic growth and a focus on promoting human dignity.

But do such discussions about human dignity occur in the large development organizations like the World Bank and the International Monetary Fund? Yes, they do. In 2007, I was invited to a seminar on Faith and Economics by Princeton economic historian  Professor Harold James at the European University Institute in Florence, Italy. When James introduced the public session of the Study Group on Faith and Economics, he remarked how the modern world seems to be marked by both the globalization of markets and the resurgence of religious activity in many parts of the world. Are these two trends connected? How does religion influence economic development? As the President of the European University Institute, Yves Meny, said what does it mean to talk about faith and economics when for many, economics is the religion of the times?

Each of the four leading figures present at this conference–Michel Camdessus, Anwar Ibrahim, Emma Rothschild, and Amartya Sen,  agreed on the basic point that economic growth in and of itself must be connected to promoting human dignity and they each made unique contributions to how this can be accomplished. For example, as the eminent economic historian from Harvard Emma Rothschildpointed out, the market does not create equity, yet classical authors like Hume and Montesquieu were concerned about the perverse effects that gross inequality could have on a democracy.

Although much contemporary writings on economics have separated the ethical and the technical, the study group participants pointed out how religious ideas and religious people contribute to generating an ethic to guide the distribution of wealth and the proper use of the fruits of wealth. For example, the Nobel Economics laureate Amartya Sen remarked how most religions contain a missionary element that leads humans to encounter other humans and consider them in an ethical light. Although neither Professor Sen nor Professor Rothschild profess or practice a particular religion, they recognized how religious faith as a transcendental approach to life—or what Professor Rothschild called “an imaginative transposition”—leads one to put himself in the position of other human beings and consider how we should treat them.

The other two conference participants, Michel Camdessus, the former Managing Director of the International Monetary Fund, and Anwar Ibrahim, the former Deputy Prime Minister of Malaysia, are both religious believers. They became friends while working with the IMF and began to share their faith, finding many commonalities despite coming from different traditions (Catholicism and Islam). When he was Managing Director of the IMF, Mr. Camdessus (who is from France) worked hard to bring discussions of values and ethics to his work. He also met regularly with religious leaders and lay leaders of different religious faiths. In both the private and public sessions of the study group meeting, Mr. Camdessus recounted conversations he had with Pope John Paul II that led him to ponder a question the Pope put to him. After the fall of communism and the spread of market economies across the globe, the Pope asked him, “Upon what values are you going to build this new global society?”

During the rest of his time at the IMF, Mr. Camdessus reflected on this very question and he also took advantage of his many opportunities to meet with political and religious leaders to ask them the same question. The answers he came up with represent the beginning of a platform that people of various religious faiths or no particular faith could agree to. During the study group meeting, Mr. Camdessus argued that we need a global economic system that promotes human dignity. He outlined three values that he thinks world leaders and world citizens can agree to: 1) a sense of global responsibility to all countries; 2) solidarity to alleviate poverty; 3) a new sense of global citizenship to back a new global governance. 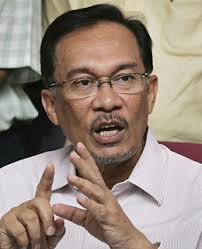 Mr. Ibrahim recounted how he has encountered many stereotypes against religious believers, in particular Muslims, in his work in international economics and development. For too many people, secularism has come to mean not just separation of church and state but also being anti-religious. He argued that faith can help bring back an ethical approach to economics. Rather than thinking of man as homos economicus, we should think of man as a universalist humanist. As Mr. Ibrahim pointed out, arguing that the theory and practice of economic development should include faith and religion does not mean that non-believers now become the excluded.

All the participants agreed that people can reach an agreement on values and ethics even if they start from different religious faiths or no faith at all. Professor Sen made a passionate call for greater dialogue about economics and ethics. Michel Camdessus’s closing words of advice or perhaps caution were: “The 21st century will be a century of ethics or it will not be.” In other words, the 21st century has shown us that technical progress in economic production, biology or science can enrich or endanger human life, making it crucial to ponder the values upon which we use our technical and economic powers.